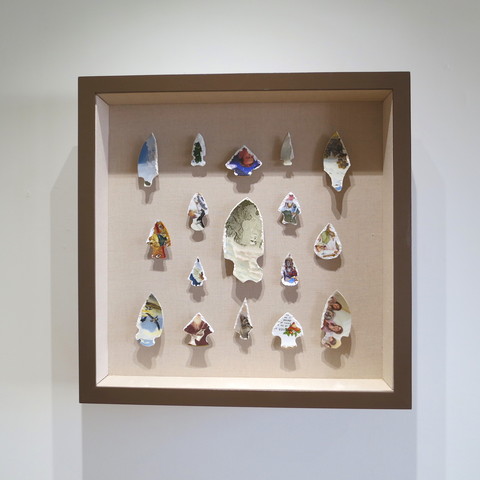 Long Lost, the collective title of this new series of sculptures, usually describes a person or thing of value once missing and recently found, i.e. a long lost uncle or a long lost pocket knife. My most recent work similarly suggest this liminal moment of memory and rediscovery. These carefully composed sculptures set in attentively crafted, glass-fronted, brightly colored wooden boxes resonate with a kind of sympathetic magic (the idea that through ritual, an object can influence action). In other words, the objects are valued not simply because they’ve been long lost; rather, they also radiate an uncanny sense of larger sentimental and cultural significance. Found and sculpted materials in each case are not banal detritus, but instead appear as archaeological relics of boyhood narratives. Although these wall sculptures might at first seem to imitate the display of artifacts found in institutional, linen-lined museum cases, I am hopeful that these works invite personal associations and the passionate psyche of childhood — adventurous play, maternal comforts, imagined heroism, lurking bogymen, and prayerful longings.

For instance, in a sculpture titled Regalia, my own old work shirt — torn and stained from years of wear in the studio over twenty years ago — is pinned in its chartreuse case with golden, star-shaped pins, as if it were a battle flag or war-torn regimental uniform. Juxtaposed with a sculpted bronze medal (imagined at its inception as an award for protecting the moon) and a small painted, found cast-iron figure of George Washington, the assemblage mirrors the honored traces of grand conflicts and the fervent patriotism of warfare. Amusingly, the shiny gold head of Washington, in contrast to his gray, matte body, alludes to the practice of rubbing hero’s statue for good luck. Of course, such statue burnishing serves as another example of sympathetic magic, the promise that one’s interaction with an esteemed object will be auspicious.

Taken as a whole, my new sculptures offer a wistful celebration of everyday possessions and poetic musings on an enigmatic past. Ultimately, these artworks pay homage to the emotional valences and real histories found in familiar and strange things.